The cryptocurrency market is supposed to rise above and beyond, but it’s currently facing a meltdown, tying down all market stocks to go head on head in turbulence. It seems that eccentric billionaire Elon Musk has the power to move markets around based on his tweets alone. He has influenced many of his followers to the crypto approach and many have begun investing. Some might call him a Guru in crypto, while some don’t think he’s capable enough to understand what crypto is. Many newcomers are waiting and looking forward to his tweet regarding the said matter, Bitcoin and Dogecoin has been his top cryptocurrencies to talk about since early 2021.

Recently, the cryptocurrency market crashed and is continuing to tank even further below. Some say it’s because of Elon Musk’s recent tweets, while some believe it’s because of its volatility. When Elon Musk mentioned that consumers can now purchase Tesla using Bitcoin, everyone was praising him and taking it as a sign that “crypto is here to stay.” Tesla even took Bitcoin into their balance sheet by purchasing $1.5 billion worth of Bitcoin. The Bitcoin was purchased for “more versatility to further diversify and optimize returns on cash. Tesla also announced that, “subject to relevant law and initially on a limited basis,” it would begin accepting Bitcoin payments in exchange for its goods and products. As a result, Tesla will be the first major automaker to do so. The news claiming that Tesla bought Bitcoin hiked up to $44,716 on February 9, 2021, an increase of 16% from the previous day. It comes days after Musk added $bitcoin to his Twitter bio, causing the price to rise even further. Although he took it down a few days later, he continues to talk about Bitcoin and other cryptocurrencies that bring interest to him like Dogecoin, which jumped 50% after his endorsement.

A twist of fate took its turn when Elon Musk updated his followers regarding Tesla suspending consumers to purchase its vehicles using Bitcoin due to the harm and danger caused towards the environment. At the end of the sentence, Tesla is on the lookout for cryptocurrencies that use less than 1% of Bitcoin’s energy usage in transactions. And that could be a hint about Dogecoin and other low energy cryptocurrencies like XRP and Cardano. Bitcoin experienced an unexpected downfall the next day, hitting its low point of $47,670 USD. This has caused major outrage from Bitcoin users and Bitcoin Maximalists¹ as they believe that Elon Musk’s is to be blamed for this drop. To support his claim, he tweeted that he strongly believes in crypto, but because of the usage of fossil fuels, there won’t be a drive for massive increments. His announcement reignited the long running discussion about Bitcoin’s environmental effects. According to critics, bitcoin mining needs preposterous amounts of energy, which is mostly derived from fossil fuels, specifically coal, although Bitcoin supports the claim that it is mainly renewable energy and that Bitcoin uses less energy than other forms of investments. 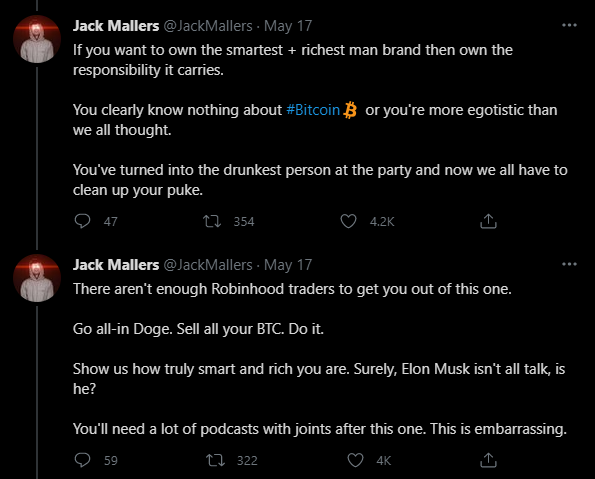 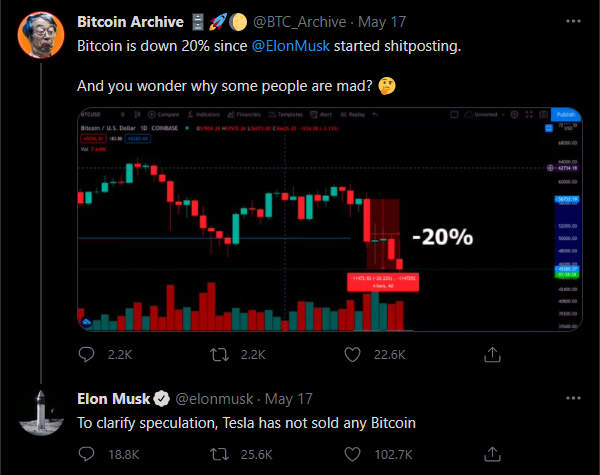 Dogecoin has recently surpassed many cryptocurrencies as the world’s fifth most valuable cryptocurrency. Its value has increased by more than 32,000% since the first trading in 2014. In April 2019, Elon Musk gave a hint that Dogecoin could be his favourite cryptocurrency, revealing that he was bringing Dogecoin to the moon. 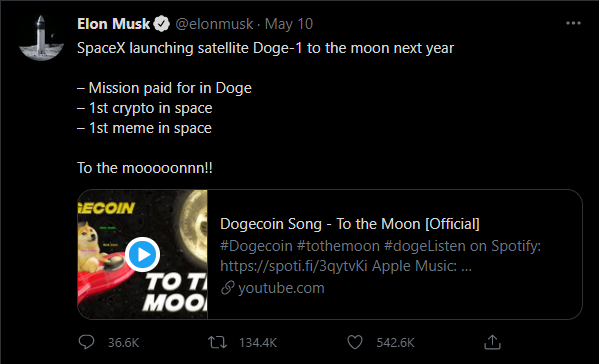 When he appeared on Saturday Night Live, he joked about Dogecoin, which soon turned to reality when he revealed once again via Twitter that SpaceX will be launching satellite Doge- 1 to the moon in 2022:

i) Mission paid for in Doge

Followed by a Dogecoin song, having a strong belief in the crypto which believes to be the people’s crypto. The price of Dogecoin quickly grew to a peak of about 73 cents later on. To illustrate how volatile the market can be, the value has fallen to about 43 cents 6 days later on 14 May 2021. The mere fact that Musk is paying attention to a token will cause its price to skyrocket. Musk has also stated publicly that his tweets about the satirical cryptocurrency are meant to be taken lightly. However, his public statements continue to drive up the price and his tweets have aided in the transformation of dogecoin from a forgotten token traded for fractions of a penny to one of the most famous cryptocurrencies in the world. 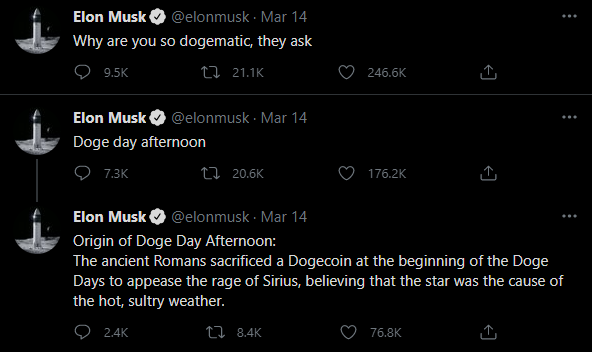 According to reports, Binance, the world’s largest cryptocurrency exchange, is being investigated for allegedly facilitating illegal trades on its website. Binance is incorporated in the Cayman Islands, with an office in Singapore, but no corporate headquarters, and the platform, like the cryptocurrency industry, has worked with little regulatory oversight. According to blockchain analysis firm Chainalysis, Binance is being used by more funds linked to illegal activity than any other cryptocurrency exchange. This is said to account for $756 million of the $2.8 billion in illegal transactions in 2019. Officials are reportedly concerned that cryptocurrencies are being used for illicit purposes such as narcotic deals, theft and tax evasion. It is said that before Binance’s US website, Americans were apparently instructed to use a VPN to make their location incognito while requesting entry to make an exchange.

Financial institutions and payment firms in China have been barred from offering services related to cryptocurrency transactions, and investors have been notified against speculative crypto trading. It was China’s most recent effort to stifle the emerging digital trading market. Under the ban, certain organizations, such as banks and online payments, are prohibited from providing clients with any cryptocurrency-related services, such as registration ,trading, clearing, and settlement. The recent plummet of cryptocurrency prices have jeopardized the protection of people’s property and upset the standard economic and financial order. The statement also emphasized the drawbacks of cryptocurrency trading, claiming that virtual currencies are not backed by real value, which can be easily manipulated, and these trading contracts are not secured under Chinese law.

Many cryptocurrency exchanges are now monitored, but cryptocurrencies are still unregulated. Many investors are attracted to cryptos because it is decentralized, meaning that it isn’t controlled by a single entity. As a matter of fact, no one has the power to blame Musk for the cause of fluctuating Bitcoin based on a tweet. If national authorities can impose restrictions on cross-border currency purchases and sales, they can’t stop people from discussing the value of a currency.